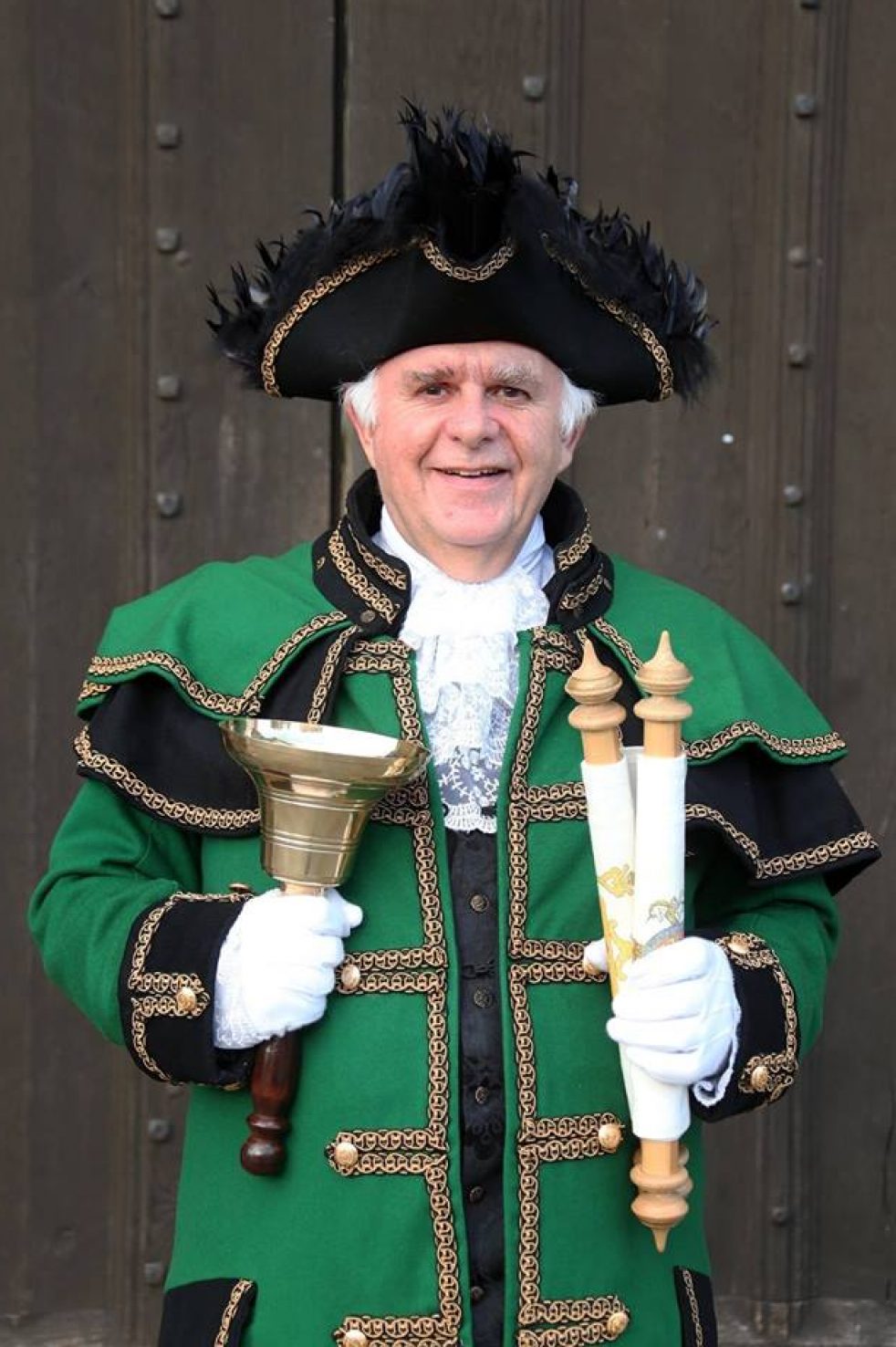 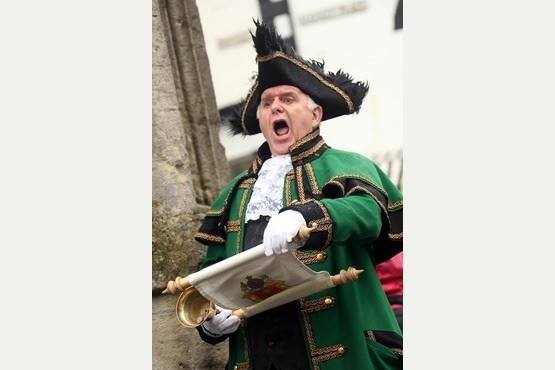 Last week I was asked by a couple of people about how I came to be a Town Crier. It’s a question that many visitors ask every year, so here’s the full story about how I ended up “on the streets”, ringing a big bell and shouting my head off at the public.
As a supply teacher, I had been employed to teach science by Glastonbury’s secondary school, for the best part of a year, to cover a staffing gap in 2013. 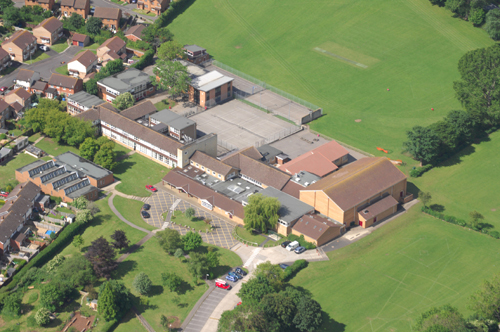 It was on the very last day of the school year that, for me, a very significant event took place. It was the July end-of-term assembly and prize-giving ceremony. It was a blazing-hot day and I was stood at the back of their massive sports hall, along with several dozen other perspiring and totally exhausted teachers, teaching assistants and office staff, watching the proceedings. It’s always a delight on these occasions to applaud all those students who have won awards for their efforts, both in and out of the classroom.
Whilst standing there, I recognised one of my old pupils from when I was teaching at a different school not far away but about 20 years before. He was sat next to the Headteacher. He was dressed in a very smart suit. His father, Graham Coles, Glastonbury’s much-loved Town Crier, had sadly passed away a few months earlier and his son was there at the prize giving to present the “Graham Coles Memorial Cup” for outstanding achievement in sport. 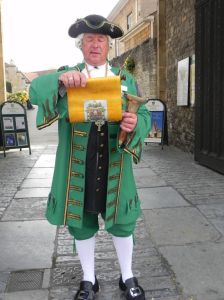 I remember Graham with much affection; we were fellow radio amateurs and I also remember him from parents’ evenings as well, when I taught his boys.
Incidentally, by an amazing coincidence, the Town Crier before Graham was also a radio amateur (or radio “ham”)!  His name was Jim Bobbett. (His call sign is G0MSL, Graham’s was G0BKU and mine is M0BJO) 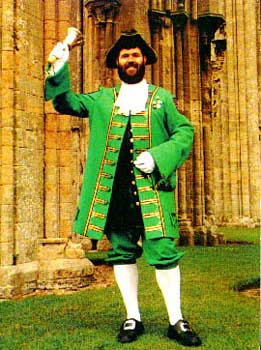 When I got home, I remember telling my wife, June, about Graham’s sad passing and the events of the last day of term. I ruminated with her on what a “fun” job it would surely be, to be the Town Crier of Glastonbury, being able to dress up and attend all those special events throughout the year. To be honest, I’d always fancied a crack at the job. In teaching, there’s always an element of “acting”, as any teacher will tell you. I would probably have enjoyed local amateur dramatics too, were it not for the fact that I just haven’t got the memory (nor patience!) to learn endless pages of lines. But in a Town Crier role, yes, I would be able to do a little “acting”, but the real bonus is that the “lines” would be written down on a scroll and I could just read them out. Perfect! The more I thought about the whole fandango, the more enthusiastic I became about the prospect of being a Town Crier.

However, I resigned myself to the thought that probably, the Town Council had already hired a replacement for Graham. I had a glance at the Town Council’s  website and sure enough, there was the advert for their Town Crier! However, my heart sank when I read the small print. I had missed the closing date for applications by four days! My dear wife June has always encouraged me; she is a wonderful optimist – she suggested I rattle off an application anyway and see what happens. That is what I did. Without delay, I hurriedly typed out an e-mail to the council, for what it was worth!
Several agonising months went by before I had a surprise communication from the Clerk of Glastonbury Town Council, inviting me to attend for an interview at the Glastonbury Town Hall. In the invitation it was explained that it would be a fairly informal interview but that at some stage during the interview, I would be expected to perform a “cry”.

The day of the interview came and so I made my way to the Town Hall with a little “cry” written out ready, just in case one was not supplied for me. As it happened, it was a pleasant, cosy chat with the Mayor and one other Town Councillor. I thought I fielded most of the questions very well. Then towards the end, they asked me to “do a cry”. Feeling rather smug I said: “Well, I just happen to have one written down here somewhere”, reaching into the inside pocket of my blazer. “I’ll just go to the end of this room”, I explained, as I started to get out of my chair, “I don’t want to deafen you!” Before I took my first step they said: “Oh, no – we want you to do it outside – at the Market Cross perhaps?” As we walked down the stairs to go outside, the caretaker rummaged in his dusty store cupboard and emerged  with a brass bell. He cheerily thrust it into my hand with a good luck wish and a bit of a wink. I was thinking to myself, just what would people make of seeing some guy ringing a bell and shouting at the top of his head, on a sunny late-summer’s evening, in the middle of town? Would I be carried away by the “men in white coats”? Would my friends quietly shake their heads in disbelief, walk on by and choose to avoid me in the future?  I consoled myself with the thought that this IS Glastonbury and compared to the many bizarre spectacles encountered in this eccentric little West Country town, this really would seem comparatively “normal”!
In the end, the interviewing panel opted to place me on the top step, infront of the Town Hall’s left side double doors. 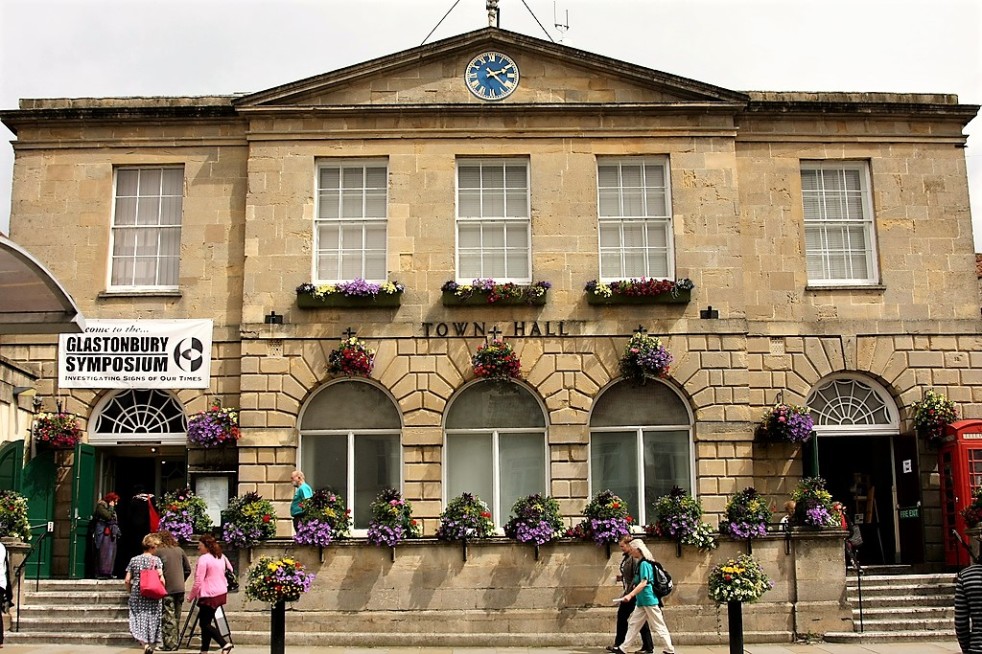 They scurried across the road and sat in a bus shelter on the other side of the road, outside of Glastonbury’s celebrated Italian restaurant, “GIGI’S”. 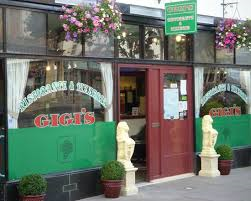 Steeling myself, I took in a big lung-full of air and belted out the following cry:

Oyez, Oyez, Oyez!
Goode Citizens of Glastonbury.
I am straightly commanded, to let it be known to all persons here gathered, that at the hour of seven of-the-clock this evening, an informal interview was conducted, for the honourable position of Town Crier of this fine town.
Mr David Alan Greenway, Schoolmaster, will be duly scrutinised on his suitability for the post.
Give heed and take note, that the interviewing panel will be: The Mayor of Glastonbury, Councillor Sue Thurgood and Councillor Denise Michell.
We wish them “good luck” in the execution of their municipal deliberations and trust that they will choose with their customary good wisdom.
God Save The Queen!

I heard the story later on, that midway through my “cry”, a party of diners had emerged from the restaurant and enquired as to why I was shouting my head off across the road. “It’s OK……he’s just auditioning for the post of Town Crier”, the panel explained. Apparently, one of the diners retorted, “He’s brilliant; give him the job!”

Since the previous Town Crier expressed a wish to be buried in his regalia, a new outfit had to be made for me. A gifted local costumier, Cath Jenkins, was appointed to provide the new Town Crier livery. I didn’t know so many bits of me had to be measured to produce a new livery! 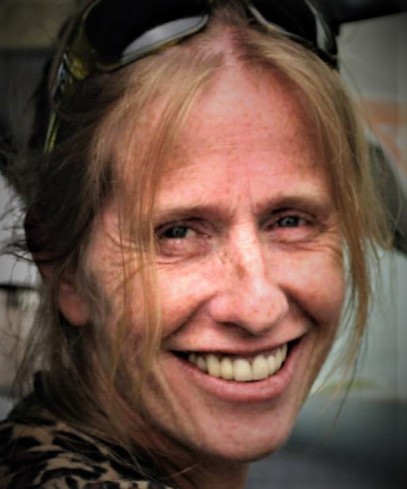 We very soon decided on the style of livery for the new Town Crier’s coat.  Here is a photo from the front of the pattern book: 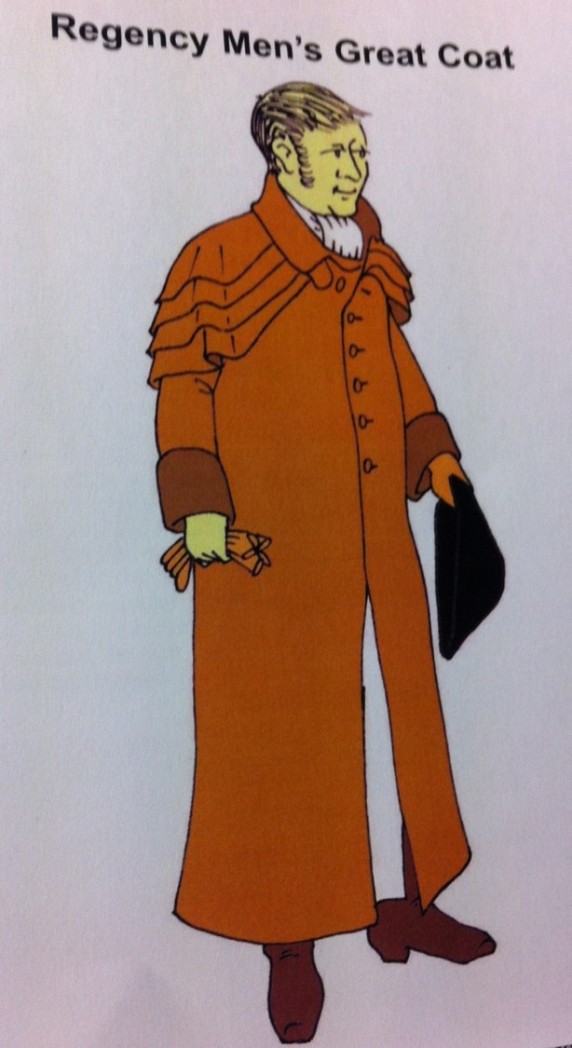 Cath worked tirelessly in her studio, in Glastonbury’s Red Brick Building and I had to attend regularly for fittings and discussions. The green and black doeskin fabrics were ordered, along with about 3 miles of braid and a myriad of buttons of various sizes. Apparently, the ceremonial garments of the Members of the House of Lords are also made from doeskin, so I felt in good company!

I  particularly like my buttons. They have “E II R” on every single one of them!  An emblematic link with the past, since once upon a time, Town Criers were the sole messengers of the reigning monarch.

Before Cath started cutting into the expensive doeskin, a mock-up was made from scrap fabrics – including an old tablecloth! 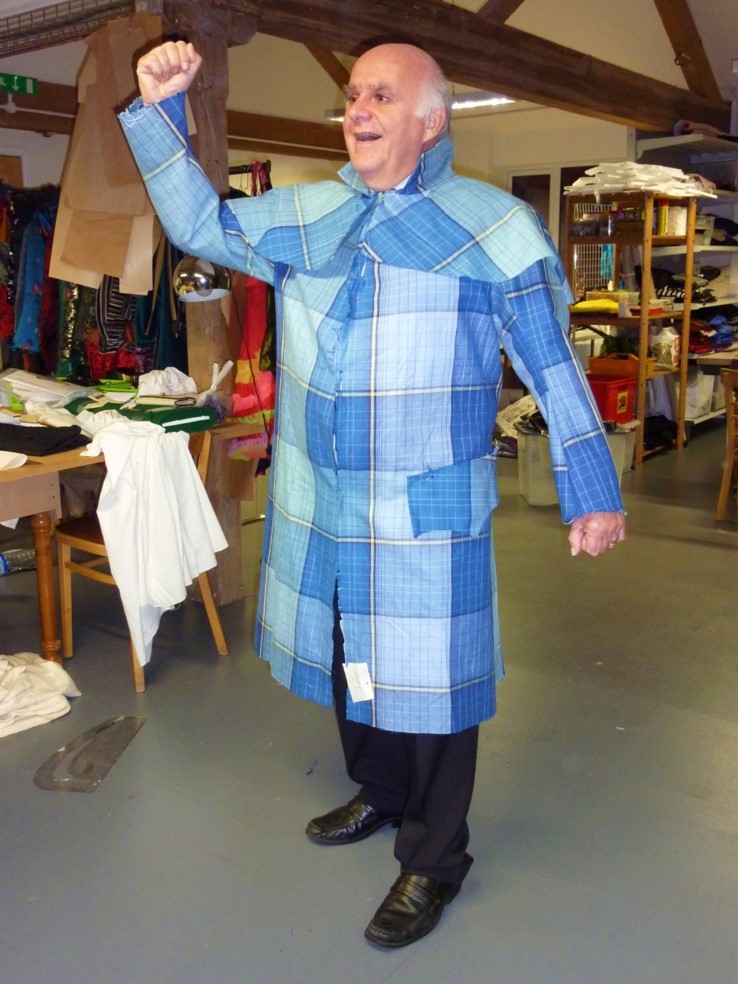 Checking bell-ringing freedom of movement with the tablecloth mock-up! 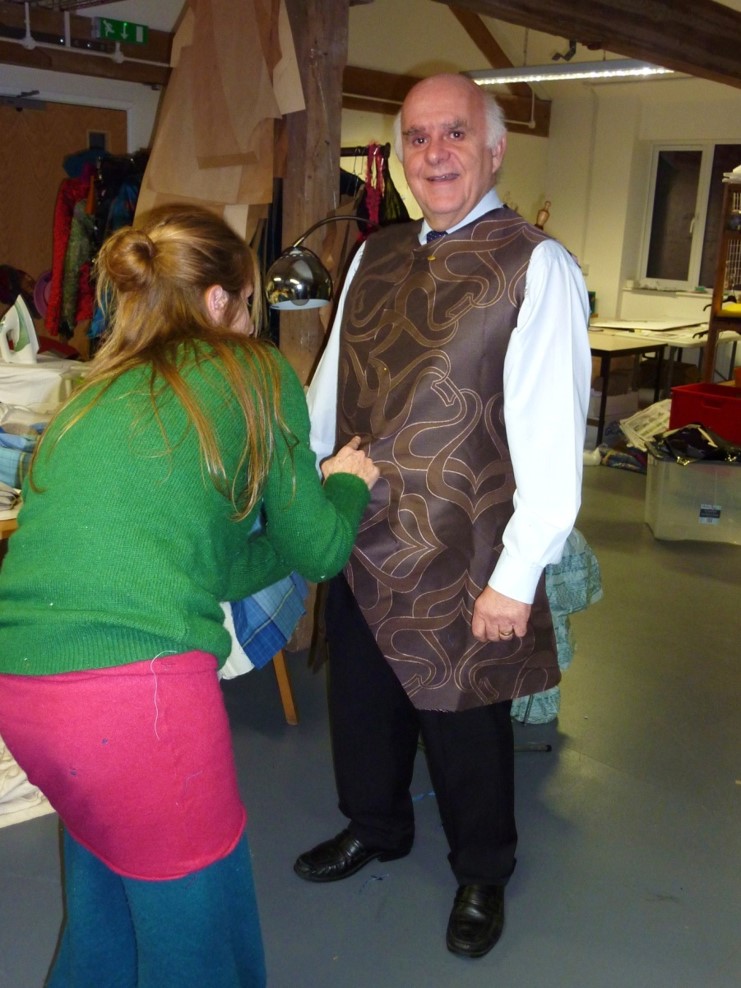 The tricorn is quite unusual. It is lined with black chick and cock feathers as opposed to the usual single ostrich feather. Feathers are symbolic, as in the olden days, only a few people (including Town Criers) could read and write with a quill pen.

Eventually all was complete and once kitted out, I presented myself to the Town Council in full regalia, at one of their meetings in the Spring of 2014, where I performed a special cry, announcing that I was ready for Civic Duties.

My dream had finally come true.