This Lockdown has been difficult for Town Criers.

Normally at this time of year when fetes and festivals begin and visitor numbers really start to increase, I am kept pretty busy in and around town. Sadly, the self-isolating public do not have events to attend as these are currently banned. Tourism has all but died. So, with no events being staged, Town Criers throughout the land, have been silenced too. If I had gone out for a “Good old cry” in Glastonbury High Street, I would probably have received a fine from the police, shouted to a virtually empty street anyway and been understandably censured by the Town Council! Glastonbury, until a week or so ago, was a shuttered ghost town – the only signs of life in the town mainly being locals scurrying to their “essential” shops, before hurrying home again.

So, I was heartened when I was contacted by Morgana West, Director of the Glastonbury Information Centre a few weeks back. Morgy had hit upon the idea of setting up an online, “Virtual” Summer Solstice Celebration for all those people who were obeying Government regulations and thoughtfully, not visiting the town nor assembling in large groups anywhere. Additionally, it was also considered that staging an online, live event would enable us to bring our Solstice Celebrations to everyone with internet access around the world and especially to the thousands who feel a particularly strong connection with Avalon.

I was delighted and honoured to take part. The idea was for me to do three long blasts on my hunting horn to welcome in the sunrise behind the Tor before launching into my “Cry of Welcome” on live video. The thought of “doing my thing” in front of a potential audience of over 20,000 people from all over the world sent a tingle up my spine – like it did when I was asked to read the Royal Proclamation a few years ago. (See my “A Right Royal Proclamation” blog post of August 2017.) Make no mistake, this was going to be a unique event, being staged in quite unprecedented times. My urge to help in sharing something rather special and quite moving, for so many, was particularly strong.

The planning for the event was shrouded in secrecy. To avoid any crowds joining in, we were not told of the exact location but simply of where to meet up at 4am, before being taken there.

On the day, I rose at 3am and I could hear the rain lashing on the windows. “We’re in for a soaking”, I thought to myself as I reached for the alarm clock and the bedside light. My long green Greatcoat and all the other paraphernalia that Town Criers need (Tricorn, bell, scroll and in my case, hunting horn) were packed in the car boot the previous night to ensure a quick getaway. I wore my long black boots after a helpful email warned of sheep ticks in the long grass. After the mistakes of the last time, when I got up early for a sunrise (see my “Beltane Bliss” blog of May 2019) I grabbed a quick cup of tea and a bite to eat first – not that one feels particularly hungry at 3:20 am.

We all met and assembled at the allotted time before being taken on a short but breathtakingly steep climb to our secret location, which had a superb view of Glastonbury Tor. 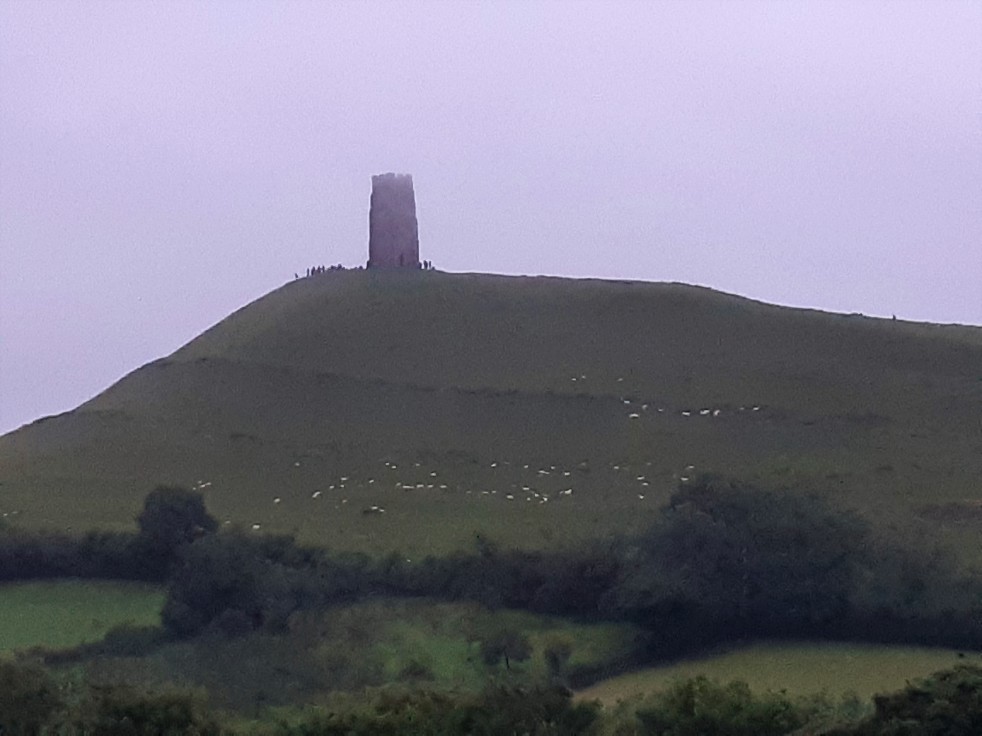 Glastonbury Tor just before sunrise – not that you’d know!

Climbing a steep, wet bank in near darkness, my right foot slipped from under me and down I went. Luckily, the only casualty was a bent handle on my big brolly! Once there, we could see and hear a Solstice “party” in full swing, around St. Michael’s Tower on the top of the Tor. There were about 50 people up there – slightly outnumbered by sheep.

The cameras rolled at about 04:45,  The first online view was of our esteemed Mayor, Jon Cousins, just hanging around in the middle of a wet field with a giant blue candle.

Jon Cousins – Mayor of Glastonbury, stood next to the celebrated Unity Candle

He moved aside at 04:55 as I did my little bit to welcome the Sun with three long blasts.

They must have heard me on the Tor!

I then welcomed everyone, preceded with some seriously-loud bell clanging!

This is the bit where I get to wake up the Town at 5 am!

There were thoughtful words from Jon Cousins (Mayor of Glastonbury) and Morgana West. I found the Silent Minute very moving – the only sounds that could be heard were the sound of distant drums and a little chanting on a mist-shrouded Tor. 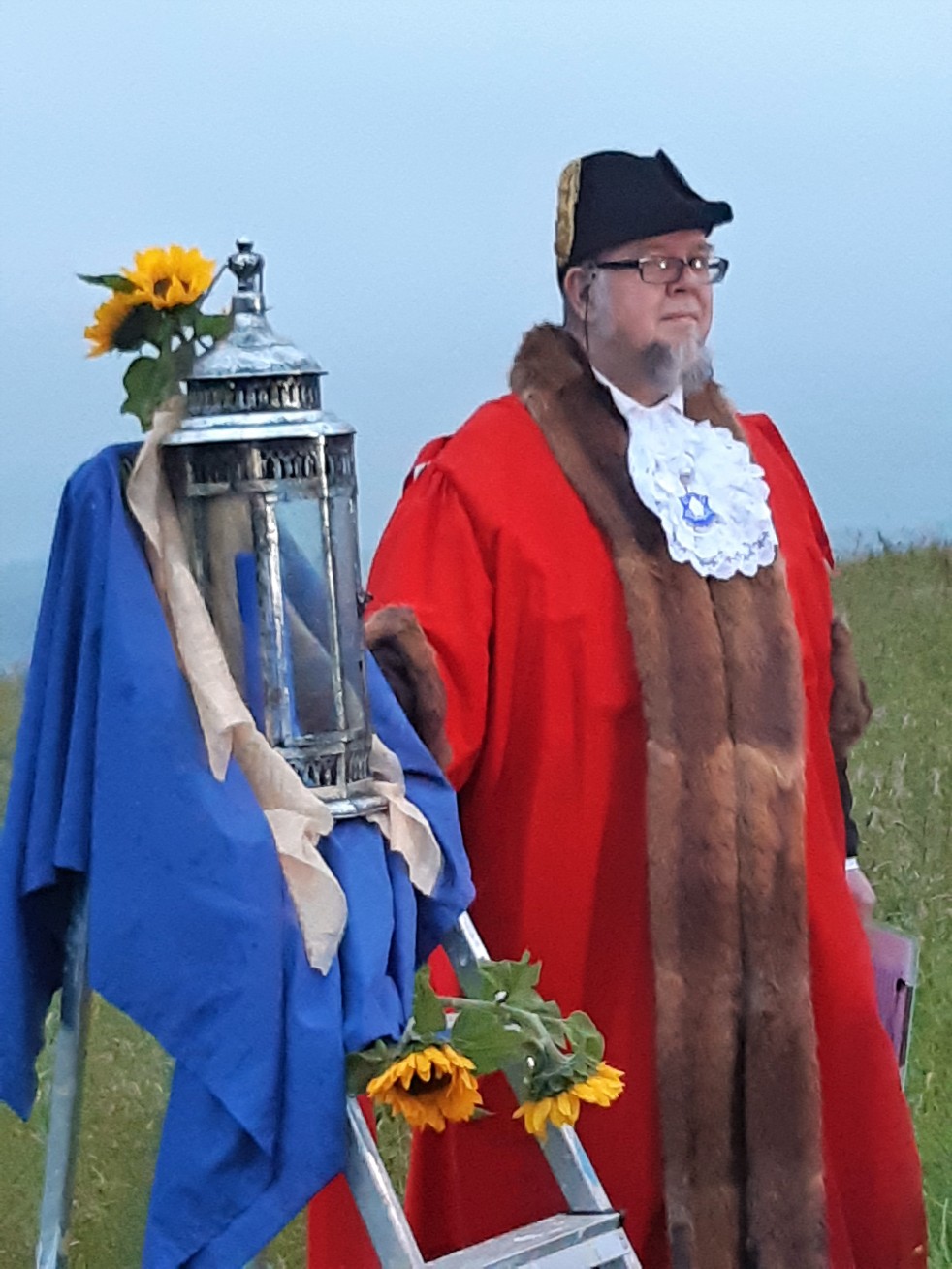 Jon Cousins with the Unity Candle, tastefully positioned on a local decorator’s steps 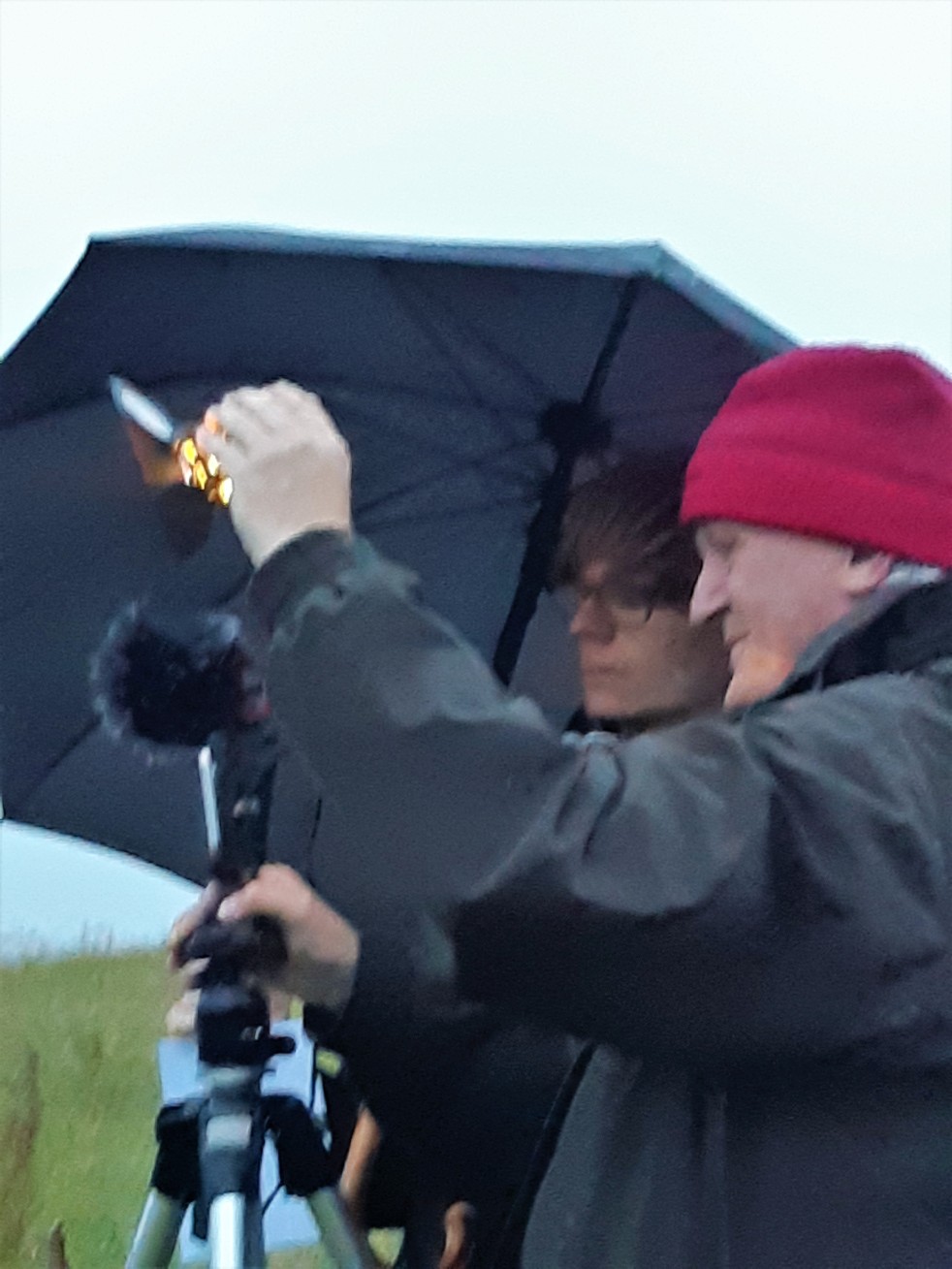 Cameraman, Kevin Redpath and his assistant, filming and monitoring the internet response

Our event flowed smoothly and we were told of hundreds of messages of thanks and goodwill flooding in from people all over the world.

Now that really warms the heart.